10 Years of The Clone Wars

I watch a lot of media. It’s true. If I’m not on YouTube watching someone play a video game, I’m on Netflix. If I’m not watching something on Netflix, it’s Hulu. Not on Hulu? I’m searching for something new on Amazon Prime or popping in a movie I’ve seen hundreds of times before. I’ve probably watched Simpsons episodes hundreds of thousands of times. I’ve put myself through two rewatches of 11 and then 12 seasons of ... [Continue Reading]

I vividly remember the exact moment I knew that the Clone Wars series had been revived. I was at work – adulting sucks – and of course I had Twitter open on my desktop. When you aren’t able to go to San Diego Comic Con, you live vicariously through some of the luckiest nerds ever. Anyway, I was constantly refreshing Bryan Young’s profile to stay updated on the latest from the Clone Wars 10th Anniversary Panel and when Bryan ... [Continue Reading]

There has been little secret about the influence Akira Kurosawa on Star Wars. George Lucas has always been open about how the Japanese filmmaker was a major influence on his work, citing The Hidden Fortress as the inspiration for A New Hope (especially in the characters of Artoo and Threepio) (Kaminski, 2012), attempting to hire Kurosawa-staple actor Toshiro Mifune first as Obi-Wan and then as Vader (Blair, 2015), and filming the cantina fight ... [Continue Reading]

When I saw that Kelly (the admin of Team Ahsoka) had put out a call for guest articles and that a lot of people were responding, I decided to join in the fun. At first, I had to think about what I could do, if I should write something about Ahsoka or Star Wars: The Clone Wars. And then I thought, “Why don’t I make a top five list of something from The Clone Wars… and include Ahsoka in it?!” Before I begin, I wanted to say ... [Continue Reading]

In her article Designing Star Wars: Ahsoka Tano, StarWars.com editor and blogger Kristin Baver celebrated the tenth anniversary of Star Wars: The Clone Wars by looking back on some of Dave Filoni’s earliest concept art and character designs for Ahsoka Tano to see how this much-loved character was brought to life and how she grew from the headstrong teenage warrior seen in The Clone Wars to the formidable and inspirational Rebel leader we ... [Continue Reading]

When I read about Kelly’s search for guest writers to celebrate the tenth anniversary of The Clone Wars, I jumped at the chance. But when I started writing and I stared at my blank screen, the doubts came crawling in. First, let me introduce myself: I’m Jordi, I hail from Catalonia, and my wife Heleia and I are big fans of Star Wars. You could say we’re children of the prequels; we were 14 when The Phantom Menace was released. ... [Continue Reading]

It’s been a decade since Star Wars: The Clone Wars first graced our screens. With the tenth anniversary of the series’ debut just around the corner, podcasters put together their tributes to the series and called on Clone Wars fans to send in their thoughts on the much-loved show and its leading female Jedi, Ahsoka Tano. Here’s a selection of tenth anniversary podcast episodes that explore Ahsoka Tano’s journey from ... [Continue Reading]

I have a confession to make. Yes, I run a Star Wars blog; yes, my daughter’s middle name is Amidala; and yes, I’ve got enough toy ships and figures to stage an reenactment of the entire saga. But until two and half years ago, I’d never seen The Clone Wars. As if that wasn’t deserving of admonishment enough, I didn’t even know what an Ahsoka was. Let me first say my seven Hail Mitth’raw’nuruodos and then I’ll explain. I ... [Continue Reading] 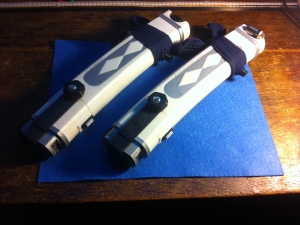 So, let me tell you a story, starting from the end. Take a quick look at the YouTube thumbnail for The Star Wars Show, from 28th June, 2017. Look at that grin! When I saw this, my heart exploded with joy and, for a brief moment, I was the happiest and proudest Star Wars fanboy in the galaxy, because you all know who that is… and I built those lightsabers she is holding. Yes, really. It all began when I decided the time had finally come to ... [Continue Reading]

Last week saw the shock announcement that twelve new episodes of Star Wars: The Clone Wars would be coming to Disney’s streaming service next year, an announcement that sent fan artists around the world into a flurry of creativity. Some of their amazing art work was showcased in this article but the #CloneWarsSaved tribute art just keeps on coming! Here’s another selection of #CloneWarsSaved artwork for you to enjoy. All of the ... [Continue Reading]

Every time there’s a major development or announcement concerning Ahsoka Tano, you can bet your backsides that fan artists will waste no time in creating gorgeous artworks to celebrate the occasion. And the recent announcement that Star Wars: The Clone Wars will be returning for one last tour of duty in 2019 is no exception. Within hours of the announcement, Star Wars fans had started sharing their sketches, doodles, and digital paintings ... [Continue Reading]