As many of you have probably noticed, especially those of you who follow me on my personal Twitter account, 2019 was a challenging year for me in many respects. Deaths in the family, financial woes, job-related anxiety, and the loss of my beloved cat Juno all took their toll on me, robbing me of the enthusiasm (and energy) I needed to run Team Ahsoka. That’s why I never got around to writing about the Clone Wars panel that was held at Star ... [Continue Reading]

Over the course of our series on the Ahsoka’s Untold Tales panel, we’ve learnt a little more about some of the key events that helped shape Ahsoka Tano into the complex and resilient character we all love. From her humble beginnings on Shili to her time living amongst the denizens of the Coruscant underworld, from her mission to a beseiged Mandalore to her pivotal role within the fledgling Rebellion, Ahsoka has survived the myriad of ... [Continue Reading] 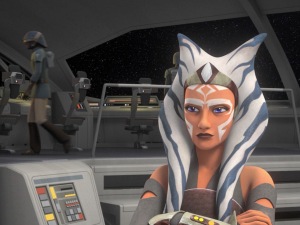 Thanks to the Ahsoka’s Untold Tales panel at Star Wars Celebration Europe 2016 and E.K. Johnston’s young adult novel, Star Wars: Ahsoka, we’ve learnt a little more about those years between Ahsoka Tano’s departure from the Jedi Order and her long-awaited return to our screens in the season one finale of Star Wars Rebels. We now know that she spent some time living in the Coruscant underworld, assisting the Jedi in the ... [Continue Reading]

When Ahsoka Tano left the Jedi Order in The Clone Wars season five finale ‘The Wrong Jedi’ and walked off into the sunset, a huge question mark hung over her fate. For two years, fans were left wondering what had happened to the disillusioned young apprentice. Had she survived Order 66? Had she been captured (or killed) when the Empire seized control of the galaxy? Would we ever see her again? So when Ahsoka made her long-awaited ... [Continue Reading]

Ever since Captain Rex mentioned serving alongside Ahsoka Tano from the Battle of Christophsis to the Siege of Mandalore in the Star Wars Rebels episode ‘The Lost Commanders’, fans have been aching to learn more about the pair’s final mission together. Granted, Ahsoka’s mission to Mandalore was nothing entirely new. Those who watched the Untold Clone Wars panel back in April 2015 would already have been familiar with some ... [Continue Reading]

When Ahsoka Tano walked away from the Jedi Order at the end of the fifth season of The Clone Wars, many of us didn’t expect her to work alongside her former master (or any of the other Jedi) ever again. Of course, we now know that she would eventually team up with the Jedi Kanan Jarrus and his Padawan Ezra Bridger in Star Wars Rebels and learnt that she also played an important role in the Siege of Mandalore, an epic battle that was ... [Continue Reading]

Back in April 2015, we got our first glimpses of some concept art and a short (and unfinished) clip depicting Ahsoka Tano on a speeder bike in the depths of Coruscant. These little morsels of information were revealed during the Untold Clone Wars panel at Star Wars Celebration Anaheim but it wasn’t until this year’s convention that we learnt a little more about what happened to Ahsoka following her departure from the Jedi Order. ... [Continue Reading]

Avid fans of the critically-acclaimed Star Wars: The Clone Wars will probably already know that Ahsoka Tano was discovered by Plo Koon and brought to the Jedi Temple on Coruscant at the tender age of three. Until recently, everything we knew about Ahsoka’s childhood was limited to a couple of lines of dialogue and a flashback scene. But during the Ahsoka’s Untold Tales panel at Star Wars Celebration Europe 2016, we learnt that Dave ... [Continue Reading]